A downloadable game for Windows and macOS

"WOWOWOW KORONE BOX" is a hololive fangame featuring Inugami Korone, member of hololive GAMERS. The game is a top-down shooter with the objective of collecting as many Korone Boxes as possible without getting hit even once. Korone must contend with many enemies and boss battles, but is given a variety of weapons to help her survive.

Controller mode can be toggled in "Settings". Controller inputs listed are for the Xbox Controller.

Collect Korone Boxes to increase your score. A random weapon is equipped every time a Korone Box is collected.

Defeat enemies using your weapons. Touching an enemy or enemy attack results in a Game Over.

Korone Boxes are periodically replaced with boss enemies that must be defeated to advance.

The game language can be set to English or Japanese in "Settings/せってい".

Mac users must allow the app in Preferences or open through the right click menu.

Interesting game. Didn't lag my potato pc. What did you use for game engine or rendering?

Finally,get all the weapons and Bosses。

Very solid game, I thoroughly enjoyed it! Playthroughs for Normal(59) and Hard(38) on Pepperbox level:

1) Enemies can hide behind boxes, and Score Number always shakes no matter the option setting.

2) BLT doesn't explode if its projectile kills the boss. I'm also curious as to why the laser itself doesn't destroy projectiles like Husketeer's slash.

3) The last 1s of spawning should flash a different colour than white, and could be less "explosive" (koronesukis, roaches & hosuinus tend to suddenly burst out at very high speed). The spawners also seem to have a tendency to trigger multiple spawns in a row, and sometimes the blinking ends faster than normal .

4) DualYubis deal way too little damage; it is the only weapon where I can't see a genuine tactical advantage.

5) I think Frisbee's self-kill is actually fine after getting used to it and knowing the map better, its a trade-off for the raw damage potential of multi-bouncing. I believe its more to do with how quick and unexpectedly far the frisbee can go that catches people off-guard.

6) Some weapons share the same sound/voice effects; for example, it would be nice if Frisbee and Bonerang are more distinguishable on audio cue.

7) Among the non-final bosses, I'd say that the Husketeer is the hardest overall, followed by Pinky Pledge, Umbrella, Joshi, and finally Dragonmute. I noticed that Dragonmute breaking out of his cage deals explosion damage though.

8) It is quite difficult to tell apart normal enemy projectiles vs the enemy rebound projectile. It is also quite hard to tell which angle the projectiles would rebound due to their spinning animation.

9) Given the large volume of fire from final boss's machine gun, I feel that it would be good if players can be trained to get used to seeing the smaller red yubi projectiles by putting them in a few regular enemies & possibly replace Husketeer's non-rebound projectiles.

10) I've occasionally encountered the boss seemingly teleport ahead after taking damage; I managed to capture this on video recently. Also PinkyPledge once teleported inside a tree.

a) I love how "Jan Ken Pon!" matches the mine trigger timer.

b) Okayu is extremely fun to use with its recoil, the speed is amazing and it has very strong DPS.

c) Mion Cannon is awesome for sweeping through fodder and its effective against the Husketeer boss.

d) The 2nd map (forest) is my favourite due to how open it is.

e) I appreciate that it is actually possible to bomb Dragonmute with Mines by standing near enough to it, else it would've been painful to deal with this boss without enemy minions spawning.

f) DualYubis' sprites are very cute, I like spinning them around.

This game is good, l have fun and interesting experience。But it had some problems when I was playing。

Mio cannon and Okayu is special weapons,but not useful enough。Because Mio cannon is underpowered to attack enemy,Ocayu have heavy recoil,which causes Korone hard to move。In this game most important thing is dodge the bullet and enemies,so I feel machine gun is better useful than this two weapons。

The final weapon is to difficult to get。I suppose it must to be defeat 4th boss to get。I play more  than 10 hours and  get over 6,000 boxes, but all these fight is failed。I know I am not good at this type of game, but I still feel is to difficult。I want to get the weapon,but I play hard and reduce the fun。Hope it can be simpler。

This game is good, l think it has more room for improvement,I will still continuously play it。

I love this game so much, but I'm trash at it-

It's so much fun! I got addicted and played it over and over again. YUBI YUBI~!

very good game! It's like an arcade game, so I come back every time to replay it and it's very relaxing to play! I'd like to play as more hololive members, but just korone is ok!

A few things frustrate me, like getting killed by my own frisbee or getting handmine to fight Dragonmute, and some weapons need buffs (for late game) like dual pistols, mio cannon and shotgun.  Overall it's a really really fun game and i'm addicted! with a few more weapons, references and mechanics, it would be perfect! Bonk hammer, best weapon -w-

This game is really fun to play, Tho I feel like the normal mode should have like 3 lives and the hardmode can only have 1 life welp overall it's really fun, if this game will still have some updates pls. add Boss Rush mode it will be really fun 9/10.

and for advice, it's really hard if just using one health for one run, i suggest to use 3/5 health and players can get heal items in the game, so it will be more fun.

Nice Game, a Multiplayer would be awesome  10/10

Game looks great. Sadly, the game crashes immediately when I try and run it. I've tried a few different things and so far, no success which is a bummer.

really liked it.
9/10 would bonk again

i can't download it even though my popup is always allow.. pain

10/10 Would bonk everything again.

¡¡¡Hello!!! I love this Game :D i need multiplayer for play whit My Friends

Really nice game! It is featured on my Week's Top 5!
Check my video!

What is the final weapon?

I hope they put it in android

Just curios, does anyone know how to get all of the guns? i am missing the last two and I am just wondering if anyone knows how to get them. Great game btw

Pretty sure it's either hitting a certain high score or a total number of boxes collected (showed on the main menu). I have all but the last weapon with a high score of 36 and 878 boxes total.

Reply
Hikiyami Moriko31 days ago
Such a cute and fun game obviously made with a lot of love towards the precious yubi dog, It has a lot of small details any fan of Korone or hololive will enjoy,  and it has a ton of replayability for infinite amounts of fun, great job!
Reply
Gwesha32 days ago (1 edit)

well ones that arnt just xbox

I would highly suggest to make an android port, i'm having soul knight vibes in this game which's the gameplay is amazing.

In the future, I hope some type of manual will be added that could tell you more about the enemies and weapons. Other than that 10/10 game!

same as me man.. pain

Mion Cannon feels underpowered, as it's slow and doesn't deal much damage. Maybe increase the duration of the laser or increase its damage a bit?

Yubivolver feels a bit too powerful. Maybe make it so you have to click for each shot?

Handmine can be strong in the right situations, but maybe decrease the recharge time a bit so more of them can be placed?

It doesn't really make sense why the range of the chainsaw would decrease while you're moving forward and increase while moving backwards. I think it should be constant in all directions regardless of movement.

How did you get the Mion Cannon?

All upgrades are based on total boxes collected as far as I can tell. Mio is at 500. I thought Okayu would be at 1000, but that was not the case.

Has anyone had luck getting dual stick to work with a DS4 controller?  It will only shoot at diagonals for me.

This is a lot of fun! Excellent work! 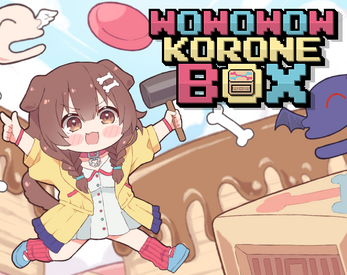